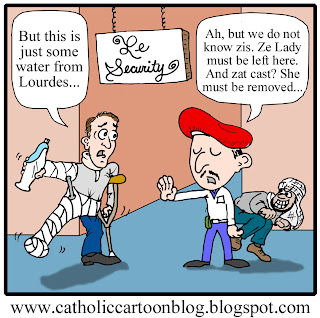 Gotta love that attention to detail. Strain at gnats and swallow camels. Read all about the French not allowing pilgrims to take their Lourdes water on a plane: http://www.cathnews.com/news/708/176.php
Posted by Paul Nichols at 9:38 AM 4 comments: 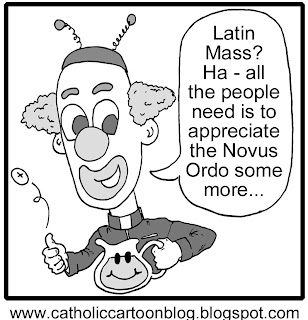 For the past few months, and especially since Pope Benedict issued his Motu Proprio freeing up the Latin Mass, those who hate the Traditional Faith have been doing the linguistic cartwheels about how nobody will attend, nobody wants it, and how the Novus Ordo is so much better.

My most recent New Oxford Review (www.newoxfordreview.org) has an article in the New Oxford Notes titled "The New Mass Just Can't Be Fixed". In it, the NOR points to the Publisher of Our Sunday Visitor, one Greg Erlandson, who did the usual ragging job on the Latin Mass, and states that "many of the problems we face - lower Mass attendance, declining awareness of the teaching of the Real Presence, even the reluctance to invite others to share our faith - can be linked to a lack of appreciation for the [New] Mass itself" (emphasis mine)

The New Oxford Review states that all of these indicators that have been on the decline are "part and parcel of the New Mass, which in the end, just can't be fixed."

If liberals hate it, it must be good. 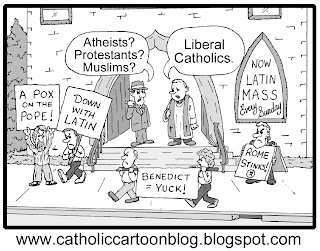 Check out the Cafeteria for some of the latest crying jags: http://closedcafeteria.blogspot.com/2007/08/cns-column-update.html
Posted by Paul Nichols at 4:37 PM 1 comment:

Faith of our Fathers - for Heaven's sake. 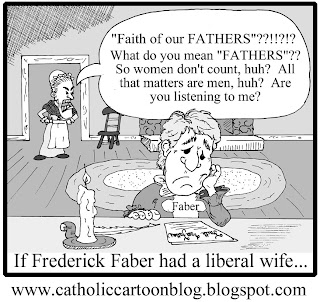 Back from vacation - and still getting caught up with work ( having a job soooo gets in the way of important things!!). At mass this past Sunday, we sang "Faith of our Fathers" - with the *new* and *improved* 3rd verse that begins "Our mothers too...". Oh, please. Naturally, I didn't sing that one, since it's such a crass political insert. Maybe I'll live long enough to see all the liberal "inclusive" verses removed, but somehow I doubt it.
But I guess it could be worse, it could be a "hymnal" from OCP, and I'd have to put up with this kind of stuff weekly instead of occasionally...
Posted by Paul Nichols at 4:44 PM 10 comments: