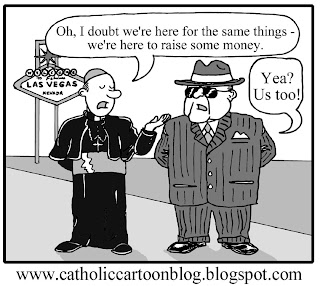 I just caught wind of this one, and I just can't help myself. The Cardinals are gathering for a big dinner in - of all places - Las Vegas. Now, I place no bad motives on anyone, or anything like that, I just find it funny that someone thought "Hey, Sin City - that sounds like a great place to have a big shindig!". Anyway, here's my take. You can read more about it over at the American Papist : http://americanpapist.com/blog.html
Posted by Paul Nichols at 12:30 PM 1 comment:

T-Shirts tell alot about you... 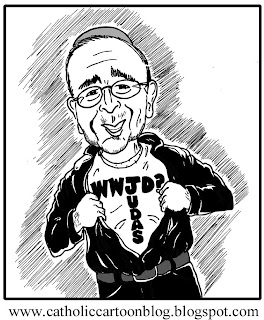 I'll admit to being puzzled about what possesses (no pun intended) these guys who are in the very embrace of the Church yet work so tirelessly against Her. As I was working on the new designs for my little shirt company, I veered off into imagining what type of t-shirt the enemies would wear:
Posted by Paul Nichols at 1:51 PM 8 comments: 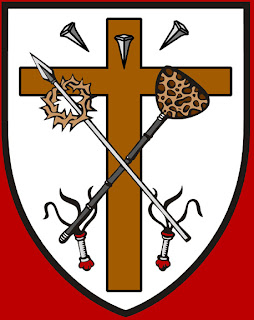 Maybe they should visit www.betterinlatin.com and see the new designs I've added to the collection. This one is a Coat of Arms for Christ. I've also added a Coat of Arms for Mary. Maybe wearing one of these would help them to remember Whom they're supposed to be working for. Feel free to visit the site. 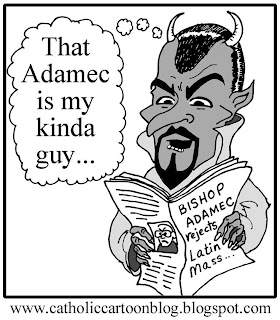 Matt Abbott has an article on Bishop Adamec's hatred for the Mass of All Ages. The Devil has workers in his vineyard, too. Read about it here: http://www.renewamerica.us/columns/abbott/070416
Posted by Paul Nichols at 1:47 PM No comments: 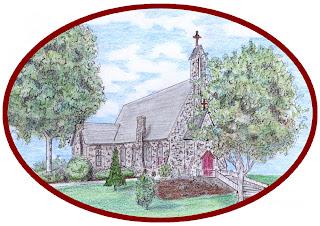 Here's a rendering of the old Sacred Heart Church in Glyndon, MD. I drew this, along with the new one, for note cards that the Church and school will use. It's a great way to raise funds for your parish . I did this for my own parish; they ordered 1000, and sold them in lots of 10. They sold out quickly. Feel free to contact me if you'd be interested.
Posted by Paul Nichols at 4:11 PM 1 comment:

Hockey is the perfect Catholic sport 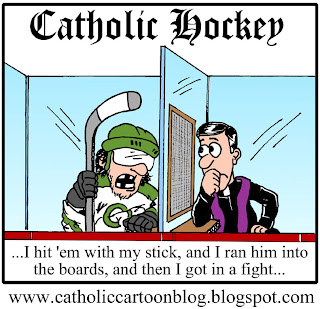 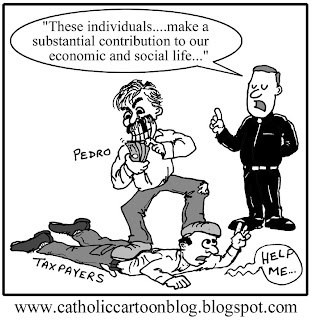 ...what world these guys live in. To take up the case of those who drain us is beyond me. Maybe my tower doesn't contain enough ivory to understand them...

Read more about our immigrant-loving Bishops at the Crescat's joint:
http://thecrescat.blogspot.com/2007/04/scapegoats-or-criminals-leeches-of.html
Posted by Paul Nichols at 5:27 PM 18 comments: 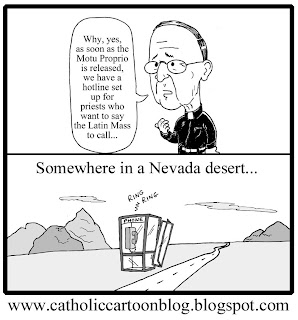 Assuming that some day this Motu Proprio is released, I wonder if the priests who want to say the Latin Mass will have to get some sort of approval or clearance from their bishop. If so, I can just picture the above happening. (click on it to see it larger)
And yes, the resemblance to a certain Cardinal is intentional. :oD
Posted by Paul Nichols at 12:25 PM 3 comments: 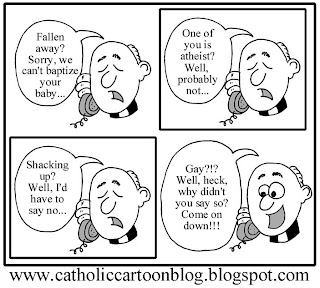 In their recent document called "Ministry to Persons with Homosexual Inclination..." the USCCB state the following regarding the baptism of children:

"The document also reaffirms the Church's forbiddance of homosexual couples adopting children. However, it does say that the baptism of such children is a matter of pastoral concern and can only happen if there is a "well-founded hope" that the children will be raised Catholic. "

But baptism is NOT allowed in the following situation:

Legitimately married straight couple.
More than one child.
One spouse takes the children to mass every week. Prays with them every night. Teaches them the Faith as best as they can.
The other spouse was raised protestant and anti-Catholic. Not a church-goer. Decent person otherwise, but hates the Church, and refuses to consent to a Catholic baptism.

So in a situation where a true effort is made, no baptism. But two queers who "claim" that a child will be raised Catholic, oh, they're ushered right in.

What's wrong with that picture?
Posted by Paul Nichols at 9:33 AM 12 comments: 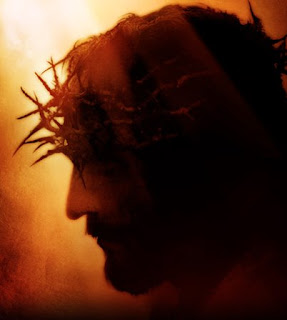 I'll not be posting anything this week, for obvious reasons, and I wish all of you a Happy and Joyful Easter.
Posted by Paul Nichols at 8:14 AM 1 comment: