Footprints of Vatican II ( a parody ) 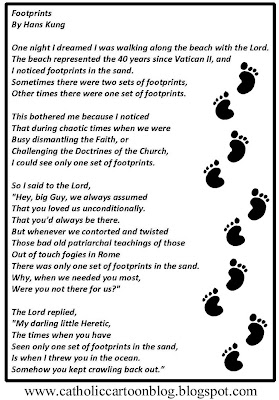 What if a heretic had written that famous poem?
(Click to see larger)
Posted by Paul Nichols at 3:19 PM 17 comments:

Hate the military? He's (Obama) with you! 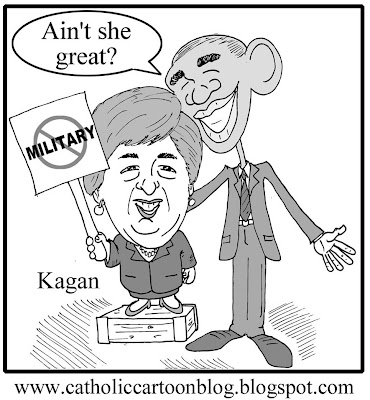 So, President Obama sees a vacancy open up on the Supreme Court, and nominates Lou Costello, um, I mean Elena Kagan?!?

Read more about Kagan and her stance at Harvard over at Mommy Life:
http://mommylife.net/archives/2010/05/kagan_harvard_t.html
Posted by Paul Nichols at 3:25 PM 3 comments:

Progression of a Convert 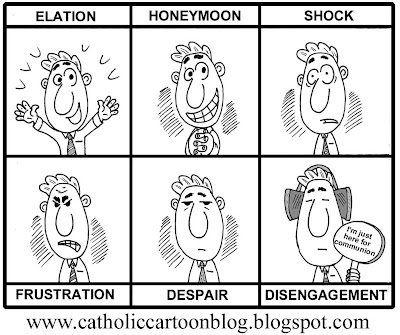 Some of you may remember that old poster from the 1970's of some guy on a drug trip (no, this was NOT in my room - it was in a friend's room), where it showed his progression from "normal" to "wasted". For some reason that popped in my head the other day.

Since my return to the Faith in 1998, I've gone through all of the stages shown here, and would guess many others have also. Things are better than they were 12 years ago, to be sure, but sometimes panel # 6 still applies.
Posted by Paul Nichols at 11:28 AM 20 comments: 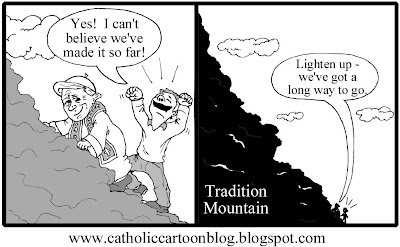 Five years into Pope Benedict's reign, the restoration has gotten off to a good start.

Matthew over at A Catholic Life has a good look-back:
http://acatholiclife.blogspot.com/2010/04/5th-anniversary-of-election-of-pope.html
Posted by Paul Nichols at 2:20 PM 5 comments: