SSPX and the lifting of the excommunications 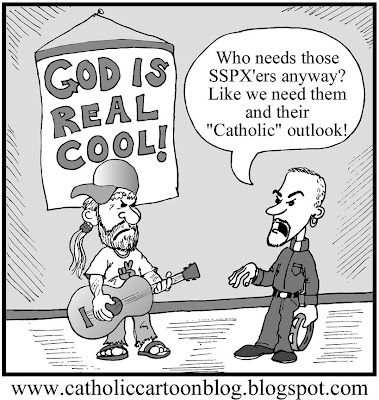 As usual, if the liberals hate it, it must be a good thing.

Father Z has a ton of info over at his blog:

Today is March For Life Day - where is YOUR Bishop? 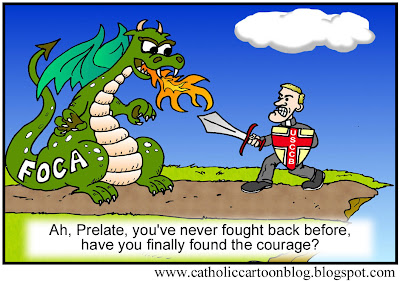 As the Grand High Pooba Obama takes over, will his radical views on abortion push the Church in America to actually fight back? History doesn't offer any hope, as most of the "leaders" are so wimpy, they'd get their lunch money taken at a Nerd Convention.

Will the few who stand up for Life finally override those who are still basically Democratic Party hacks? When the ball starts rolling on the Freedom of Choice Act (FOCA), will those "catholic" Democrats supporting it be called to task? No, not called to "dialogue" - there's been too much of that. Will the Church stand up?

We'll see. But I'm not optimistic, judging by how so many of our Bishops and their sheep in the pews have fallen head over heels for The Chosen One.
Posted by Paul Nichols at 10:32 AM 10 comments: 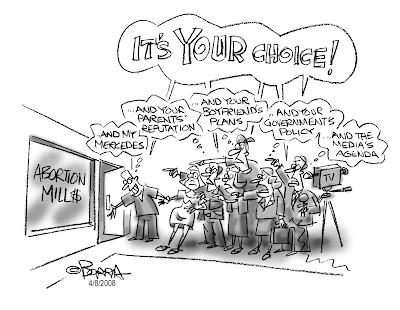 In a dramatic FIRST, I'll be offering a cartoon that isn't mine:

This is from John Francis Borra, SFO, who's been doing pro-life cartoons for quite a while. Thankfully, he's started a blog, so swing on by and take a look at his cartoons. I'm sure Comrade Obama will keep our pens busy for the next few years!

Have I mentioned I hate the Guitar Mass? 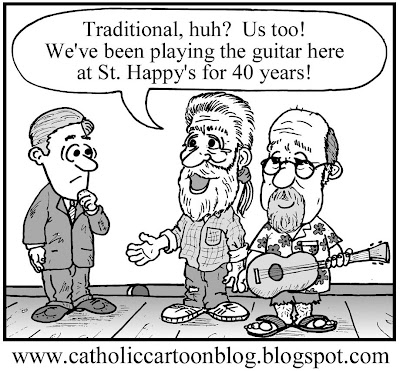 Another big holiday, another Mass ruined by the guitar. My parish is tolerable. And when I say tolerable, I mean it in the sense that at least it's not as bad as many others out there. Once a month, the hippies take over in full force and the 10:30 Mass is a 1970's-era guitar fest. Truly awful. On those days, I try to go somewhere else. On occasion, I've walked out. Once I gathered up the kids and we walked out on Easter Sunday. Of all days, Easter Sunday! It's bad enough that they get to ruin a Mass on the 2nd Sunday of every month, but when they also get to ruin the BIG ONES, well, that's just plain wrong.

This past Christmas, I made the mistake of going to the 7:30 instead of the Midnight Mass. So me and the kids are sitting there before mass and we hear it - the strum of a guitar. Someone's warming up a guitar! My daughter looked at me and I just rolled my eyes. We joke about "offering it up". My 12-year old leans over to me and says "I hate the guitar mass". I said, "Yea, me too, but we'll suffer through it this time."

To top it off, instead of a homily, we were treated to a visiting priest reading a story from a kid's Christmas book! I swear it took every bit of 20-25 minutes to get through that book. Worst. Christmas. Mass. Ever. Thanks Vatican II!
Posted by Paul Nichols at 8:55 AM 93 comments:

While the crickets chirp away...

The Curt Jester had a post on New Year's Day about which Holy Day of Obligation is the most neglected, which led to some interesting discussions in the ComBox.
http://www.splendoroftruth.com/curtjester/archives/2009/01/feast-with-the.php

This cartoon was sparked recently when I heard a priest lament that only 37 people showed up for the Advent Penance Service. On a regular Sunday, I think we get upwards of 1000-1500 people for our 2 masses. I may be overshooting it a bit. So the 37 number was pretty sorry.

But in my 10 years back, I can count on one hand when I've heard a priest specifically mention something being a sin. And I think I can further count on this one hand while one finger is stuck in my ear. Abortion? Once. Birth Control? Once. Homosexuality? Once. The Big Three in our culture today, and I've heard them specifically mentioned probably just once each. And that's misleading, because the abortion and birth control issues were raised in one homily - by a transitional deacon, no less. (As a side note, I ran into this deacon the following week and told him that he hit a home run with his homily - he actually had tears in his eyes. My guess, and it's only a guess, is that he was probably upbraided for being so bold.)

If, in today's Church, practically NOTHING is a sin, then what exactly would need to be confessed? God loves everyone, He's never mad about what we do, and everything "bad" we do can be reasoned away with buckets full of Oprah & Dr. Phil psychological babble.
Posted by Paul Nichols at 3:53 PM 11 comments: