The Guitar has always been incompatible with the Faith 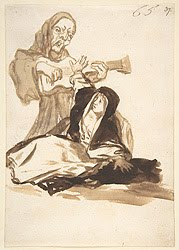 In the Winter issue of Drawing Magazine, there's an article on the Spanish Masters, of which Francisco de Goya is counted. The drawing above is titled "A Nun Frightened by a Ghost", c. 1812–20 The Metropolitan Museum of Art, New York.

Now, way back when this was produced, roughly 140 years before Vatican II, de Goya had no way of knowing what was down the road for the Church...or did he?

Either way, it's plainly obvious that the nun is more frightened by the guitar than she is by the musical directo- um, I mean ghost.
Posted by Paul Nichols at 1:09 PM 20 comments:

Should the Church throw her lot in with popular culture in order to gain "relevance"? 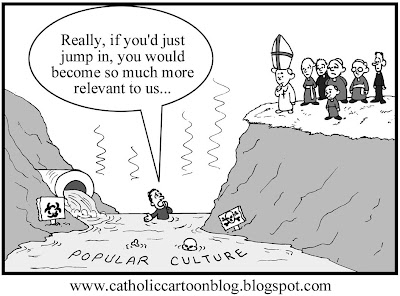 I've linked to an article by a religion writer for the Huffington Post. As you can imagine with anything from the HuffPo, it's decidedly anti-Church in it's outlook. The writer, a 23 year old who classifies himself as "...grew up Catholic" to avoid the impression that I would ever participate in such silliness...", puts forth the idea that if the Church could just get with the popular culture, his generation would find the Church on the way toward becoming "relevant".

I believe we've seen, since the 1960's, too many instances of the Church trying to be "relevant" to the popular culture. The effort to throw open the windows and let the World in has been a failure. Instead of evangelizing the world, the world and it's secular viewpoint has infected the Church, or more clearly, has infected the thinking of many inside the Church. We don't need a Church to "play down" to the popular culture, we need a Church to stand strong against it and call it out of it's darkness.

Pray that the Church continues on her road of Restoration, and that She resists the temptation to become "relevant" to the popular culture.