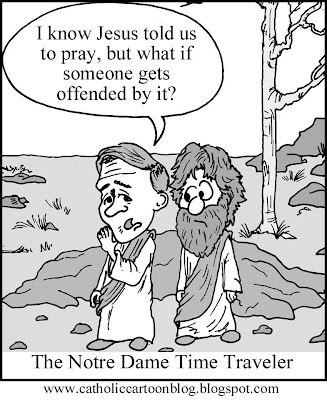 I'm sure most of you have heard of the tragic accident last week at Notre Dame that killed a young man who was up on some scaffolding filming the football team. At Saturday's football game, the public address announcer asked for a "moment of silence". You'd think that a Catholic college would offer a prayer for his soul, especially at a public gathering. Nope - not at Notre Dame.

My daughter is a freshman at Mt. Saint Mary's University in Emmitsburg, MD. When we went to the orientation, the President of the University stated that they were "proudly Catholic", and that "The Mount" was a "Catholic University", not simply a University with a Catholic identity. That was reassuring to hear.

Shortly after the start of the school year, a freshman died tragically due to heatstroke. The Chaplain of the school, along with the President, held a public prayer outdoors for her soul, and to beg comfort for her parents, family, & friends. It was attended by a large contingent of the student body, and the local newspaper filmed a portion of it and posted it on their website. There was no "moment of silence", there was no embarrassment for their Catholicism, there no "neutering" of the prayers to avoid offense.

Quite a study in contrasts between a university that has the "veneer" of, and is embarrassed by, Catholicism (Notre Dame), and one that embraces and is proud of Catholicism (Mount Saint Mary's).

And please remember to offer a prayer for the soul of that young man, even if Notre Dame would rather you didn't.
Posted by Paul Nichols at 10:21 AM 16 comments: