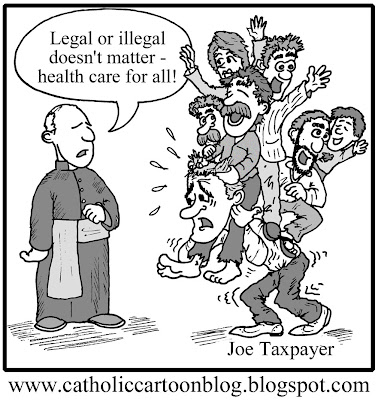 From Catholic News Service:
WASHINGTON (CNS) -- Though Bishop William F. Murphy of Rockville Centre, N.Y., concedes there's no political will in Washington to include illegal immigrants in health care reform, he believes it's the country's moral obligation to ensure that everyone in the nation receives proper medical care.

The blind spot that the illegal cheerleader lobby has overlooked (willfully, I think), is that you won't be able to pick or choose from among the big three. By pushing for illegals to have access, the Bishops are aiding and abetting the expansion of abortion and contraception; Obama and the Democrats will not have a health care bill that doesn't include illegals, abortion, and contraception. That's the "big 3".

What the Bishops fail to realize is that by advocating a government takeover of health care, they're holding the door open for the very beast that will chew up Catholic healthcare and spit it out.

Read all about it at Catholic News Service:
http://www.catholicnews.com/data/stories/cns/0904223.htm
Posted by Paul Nichols at 12:10 PM 11 comments: 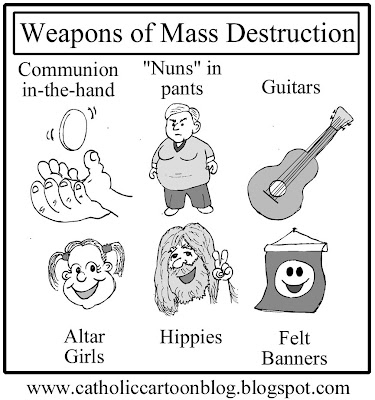 Not that this is a complete list, but you get the idea. Take the poll and vote on which of these has had the worst effect on the Mass.
Posted by Paul Nichols at 12:09 PM 68 comments: 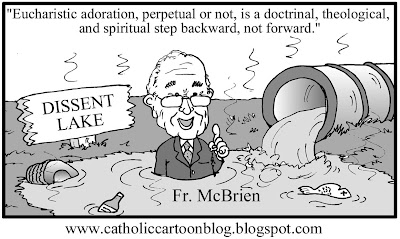 Well, Fr. McBrien is up to his old (and getting older) tricks. This time, in his dissent-o-pulpit in the National Catholic Reporter, he said the following regarding Eucharistic Adoration:

"Eucharistic adoration, perpetual or not, is a doctrinal, theological, and spiritual step backward, not forward."

Gee, considering where the "forward-thinking" post-Vatican II types have been leading us for 40 years, maybe a step backward isn't such a bad idea.

But consider how, in this case, "reaching back to antiquity" is a bad thing. Yet when the dissenters want to trash the liturgy, they appeal to some old, long outdated practice as justification for their novelties.

So I suppose the only conclusion one can draw is this: that appealing to antiquity, in the dissenters eyes, is only a bad thing when it leads us closer to Christ. 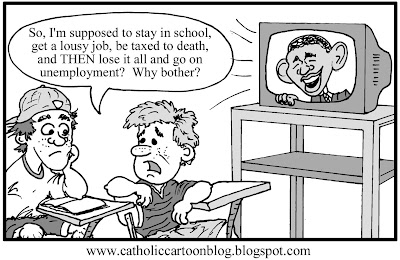 What Obama *didn't* say:
"Hi kids, it's me, your dear leader. I'm here to implore you to stick with school, so that you can become good citizens - plus, with all my entitlement programs, we're going to need many of you to foot the bill! So work hard, kids!"
Posted by Paul Nichols at 3:59 PM 3 comments: