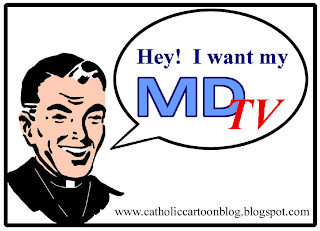 An old pal of mine, Chuck, from waaaay back in the Catholic Discussion Group days, has been tirelessly working on the launch of Mater Dei Television. The feed isn't up yet, but the blog associated with it is. It will feature tons and tons of old Catholic programs like the old "Catholic Hour", along with a bunch of old footage of and programs on the Popes. He sent me a preview disc and it was incredible! I highly recommend this effort! It's a great way to actually see some of our Catholic Heritage which has been so carelessly discarded by the Modernists!

Visit the Blog - http://www.materdeitelevision.blogspot.com/ !
Posted by Paul Nichols at 4:04 PM