If you build it, they will tear it down... 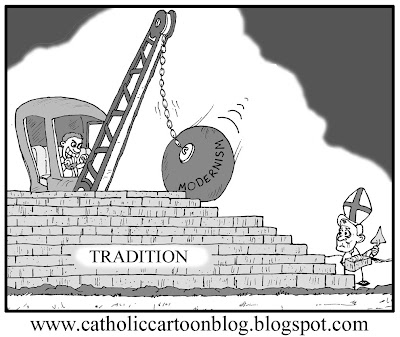 Inspired by a comment in the ComBox of the last cartoon, here's the Pope doing what he can to rebuild some Tradition into the Church. Of course, every time that he does, you see the uproar and disdain from those committed to a "new Church", which claims a history only as far back as 1968.

Recently we saw the uproar over the whole SSPX/Holocaust issue. As though someone who thinks a certain way on a particular issue can't possibly be allowed in the Church. And, to be clear, I certainly wouldn't deny the Holocaust. But if someone wants to deny it, or take issue with the # of people lost, I figure, hey, it's a free world.

But the uproar that it created, both on the theological Left and Right, was just too over the top, when you consider that we have things like this =====> http://www.stbernadette.org/teenhaven.htm going on in parishes that are considered more "in communion" with Rome than an SSPX parish.

There are parishes like this all over the country, but I don't see anything being done about it. The silence, or in some cases, outright endorsement of this sort of thing by dioceses and Archdioceses (in this case, Baltimore), makes the uproar over Bishop Williamson seem hollow.

Parishes like this St. Bernadette's are "in communion". But an SSPX isn't. Wow.
Posted by Paul Nichols at 3:24 PM

On the plus side, though, anyone looking for a good, Catholic college aligned with Church teaching is given a free listing of colleges to cross off their application list: http://stbernadette.org/colleges.htm

Cullen, that's exactly what I thought!

and Paul, I think I don't necessarily agree with you on SSPX (heck, if they don't agree about the authority of the Pope to the extent that they'll ordain priests and bishops without his approval, that's a serious error). But you are right to point out just how wrong this website is. I've written a brief message to the ArchBishop. Perhaps he'll take a look and be as appalled as I was. Perhaps he'll even do something about it.
But in the mean time, I've got it covered in prayer. Perhaps a youth who has been questioning his/her sexual proclivities will attend one of their meetings and realize that this is NOT the lifestyle meant for them.

But let us pray that this "Catholic" church not lead people astray!

and for that matter 95% of the Archdiocese of Los Angeles, fortunately I go to one of the good parishes.

But you are right to point out just how wrong this website is. I've written a brief message to the ArchBishop. Perhaps he'll take a look and be as appalled as I was. Perhaps he'll even do something about it.
=================================
That's highly unlikely, Carol, since the Arch. of Baltimore has their own "outreach" to the gays, which everyone knows is really just a cover for advocacy.

I doubt the Archbishop is unaware of what's going on over there, since they've even been profiled in the Washington Post about their stand on gays.

And you're lucky, Joe. Even in the woods of heresy, the sun breaks through! :oD

Wow! That is some website -
your right - how could the Diocese let that stand.

I am no longer into, "movies", but I am reminded of that trash remake of A Star Is Born, when Kristofferson's character says to his audience,
" Are you a figment of my imagination, or am I one of yours?"
I "wonder" which side actually 'departed' from the true faith?

I "wonder" that's all - as it says in scripture:
"...by their fruits you shall know them."

Let's consider the SSPX and Rome through both sides of the looking glass.

So, we pray for goofd fruit.

Either that link is erroneous or has been removed. Would that St. Bernadette's of Severn be removed! I went to one Mass there . . . one more than I needed.

Shouldn't the church be flexible without losing tradition?

it is a pity that you don't see the need for change, and the need to keep some tradition at least

I know of a African-American priest(Fr Joseph Skelton) who says mass in the old form and dances in catholic charismatic prayer meetings!

can you accept it?

I know of a African-American priest(Fr Joseph Skelton) who says mass in the old form and dances in catholic charismatic prayer meetings!

That whole charismatic thing - dancing around like a lunatic and laying on the floor acting like a sizzling slice of bacon ain't quite my style, though. :oD

Paul, your depictions are just too cool, and you always hit the nail right on the head. Thank you for making me laugh and smile. Keep 'em coming.

He does it Outside the Mass(Go Google Him)

In the Church Ressourcement is Like a Sail, and Aggiornamento is Like the Boat. Without Either,the Other will be perished forever!

Well, why do you all think that these parish's are Catholic at all? Do they hold publicly to heresy? Do they teach things totally against what was taught as, " true" just 100 years ago? Even the person calling himself Pope, has taught heresy, publicly. Why is he Catholic? Why are you Catholic?

In order for a person to be Catholic, they must be, One, Holy, and Apostolic. How do any of these so called Priests, hold up these things, when they contradict Catholic teaching by believing that there is salvation to be had by those outside of the Catholic Church?

No, they are not Catholic. Open your eyes. There is no good reason to believe that they are Catholic, unless they abjure their heresies, which they publicly profess, and truly convert to Catholicism. So many who say that they are Catholic, have offered their 2 cents of incense to the false gods of today.. Don't be one of them, damning your soul to Hell eternally.

Well, I haven't had the chance to go through your website, but you certainly won't get an argument from most of us who travel through the Cartoon Blog about the idiocy that gets doled out in some parishes.

And, just to be decent, Anonymous, I'd say I'm Catholic simply for the same reason that Peter stated - "Where else would I go?"