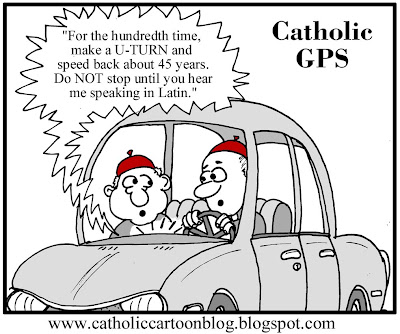 As the Church begins what we hope is a long, albeit slow, return to its' traditions, I have to admit that the idea of a "reform of the reform" comes up a bit short.

In any other type of situation, if you looked back over the last 40 years and saw nothing but devastation, wouldn't you think that the time had come to admit so?

Now, don't get me wrong, I'm picking no fight with the "reform of the reform" guys, but why "reform" something that has been a complete failure? Wouldn't you scrap the whole thing?

You're hiking in the woods, on a long and well-traveled path, and the sun is shining, and there's no mosquitos, no wild animals, no threats of any kind. Then you take a turn off of that path and encounter deep, dark valleys, snakes, bears, and every other kind of awful thing, wouldn't you re-trace your steps and get back to where you made the wrong turn to begin with?

Maybe it's all more complicated than that.


For a good article on the architect of the guy who was instrumental in constructing that dark and treacherous path, check out:
http://rorate-caeli.blogspot.com/2010/10/bugnini-i-am-liturgical-reform.html
Posted by Paul Nichols at 10:26 AM

unfortunately, for too many of the faithful today, the Extraordinary Form is like pearls before swine.

Fortunately, the Holy Father knows this.....

You're right, Anonymous - so many have no concept of the Latin Mass. It's too bad, really. I think in many cases, they're eyes would be open. Although in more than a few, I think they're so used to the usual drivel that it would go over their heads.

Historically, we are moving along at record speeds, normally it takes centuries for a council to be properly obeyed everywhere.

And I personally hope we keep the vernacular, in language and in music.
I mean Jesus said the mass in the Vernacular, as did the early church! As St. Paul says in First Corinthians 9:20-22 the church must conform to the culture in manners of doctrine (but not in infallible dogma (1 Cor. 9:21)

Historically, we are moving along at record speeds, normally it takes centuries for a council to be properly obeyed everywhere.
--------------------------
Considering what's been wrought in just 40 years, I'd hate to see what things would look like if it continued unabated for a century.

And as for conforming to the culture in manners of doctrine, give the state of today's culture, I'd cringe at any "conforming" on the Church's part. She needs to stand apart from this culture as much as possible.

There was a priest on EWTN about 2 weeks ago who was talking about just that - he said that after the council, the Church embraced the culture too much, specifically in the way so many priests shunned the Roman Collar. He said that was "crazy" and that we (priests - and lay Catholics) should be "part" of culture, but not "one" with culture. And this was most true of priests.

And I should have said "given" the state of today's culture, no "give". Sr. Myra would have my hide!

To be of the culture is to be made from it, to be nothing more than it. To be in the culture is to conform about the lesser things (such as doctrine) and be above in the important things (such as dogmas).
Historically the church has been very conforming about doctrines and rites. Most of the doctrines and rites that you wish the church returned to were things the church used to conform to the culture ages past.
So to continue with biblical truth and Church Tradition, we must continue to conform in the little things, even if it seems silly to you.
It works wonders, in my own experience I have seen it work. I belong to two diocese and two parishes (long story) of opposite ends of the spectrum. One is very conservative and traditional, while the other one is more liberal (without stepping out of church law or going into heresy). Guess which one has a larger RCIA program? Which is bringing more Catholics to the church? Which has more Catholics truly on fire.
Of course, as with all ages there are dangers with too much conforming. When we conform our infallible dogmas, we have a problem. So we must keep our objectives unchanging and our subjective conforming.

That is an excellent cartoon!

Not that Catholicism doesn't cover those issues, but often "social justice" types keep their Catholicism at a minimum.

Of course Paul, as I said a good deal of churches go to far or lose sight of the goal.

But abuse does not annul the proper use, just because some lose sight of the goal does not mean we should run from the current rites.

When considering how people sin in big ways, usually it's a slow slide beforehand. A little inappropriate behavior that's "OK", some necking on the couch before the "big" (aka visible) sin of a child out of wedlock.

If the church was so healthy and grand before the council...why did she "fall" so hard and quickly? I have a hard time believing it was all roses and happy forests before.

Christ knows what he is doing, he is in charge of this church. He's allowed her to be shaken this century for a reason -- so that she will be purified and made holy.

I look forward to the day when we have more of the traditions and less of the sins.

Having grown to love a Liturgy that is more traditional than the Gregorian, and finally having moved to where I have a Byzantine Church 15 minutes from my house, I've decided I ain't waiting out the process.

I surely can't blame you for not wanting to wait, John. I think only the youngest among us will be around when the full restoration occurs.

There's a youthful seminarian (me) trying to speed up the process...

I agree that some methods should change back to pre-Vatican II days, such as the priest's position facing away from the tabernacle (not to mention the placement of the tabernacle); however, what is it that you, Paul, feel needs to change? Besides the language of the masses (which I disagree with).

however, what is it that you, Paul, feel needs to change? Besides the language of the masses (which I disagree with).
--------------------------
I think the Novus Ordo should be shelved and that in it's place should be a FAITHFUL English translation of the Latin Mass. The first time I went to a Latin Mass, I followed along with the Latin-English "side by side" translation. I wonder why, if they wanted mass in the vernacular, they didn't simply translate the Latin? Why was an entirely new mass manufactured?

So you ask, what would I change? That would be it. Simply make make the vernacular a translation from what we have in the Latin Mass.

I admit i found the cartoon to be funny. I understand the cartoon and what its saying about reforming the Chruch to what it used to be. However, i believe that the Chruch shouldnt look back and try to emulate what they have already done. Rather, they should try and make the Chruch better than what it was, and keep on making improvements from there.