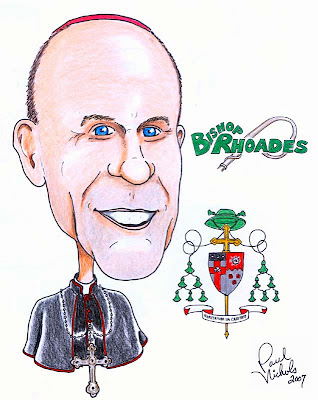 I know I've posted this picture before, but I have to toot the horn for the Bishop of Harrisburg, a Diocese of which I'm proudly a member. In an age when so many of them seem embarrassed by their Catholicity, Bishop Rhoades walks tall in his. He'll be at the March for Life in D.C. again this year.
Bishop to Stand for LifeFriday, January 11, 2008
Media Advisory January 11, 2008
What: Bishop Kevin C. Rhoades of the Catholic Diocese of Harrisburg will take part in activities in the diocese as well as in Washington, D.C. to demonstrate support for the sanctity and protection of all human life. Many local people will travel to the National observance via buses from Shamokin, Danville, Middletown, Hershey, Lancaster, York, Carlisle, New Cumberland, Waynesboro and other local areas. Schedule: Sunday, January 20, 2008 - Millersville, PA 11:30 a.m. Diocesan Pro-Life Mass, Saint Philip the Apostle Church, 2111 Millersville Pike, Lancaster, PA 17603. A vase of 35 flowers symbolizing the years since the Roe v. Wade decision will be on display.

I had the honor of joining Father Dennis Dalessandro and Father Michael Letteer at the Vigil Mass for Life. Our beloved Bishop Rhoades was there with fifty other bishops, 500 seminarians, 100 deacons and ONE THOUSAND PRIESTS. The Basilica of the National Shrine of the Immaculate Conception never saw so many clergy ever. And then there were the lay faithful, almost 6,000 of them, many young, besides. What a beautiful way to prepare for the March for Life the next day and I dare say we had more than half a million if not three quarters, peacefully protesting abortion, euthanasia and embryonic stem cell research.

I wish I could have gone down there. One of these years I'm going to have to take off from work.