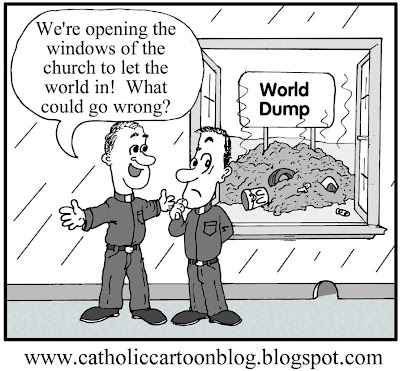 A Cardinal (at the Vatican) talks about priests being too "worldly". Gee ya think? Not that they're all that way, of course. But generally speaking, he's on to something. Maybe it can be traced back to that "embracing of the world" stuff from Vatican II?

Read more about over at the Cafeteria: http://closedcafeteria.blogspot.com/2008/02/priests-too-worldly.html
Posted by Paul Nichols at 9:38 AM

Love the cartoon! I'd also have to add the Catholic Laity (myself included) are a bit too worldly as well! Keep up the good work!

Yes we are, James. We should always work on that. More so these days.

I agree Paul...We really need to work to be "in the world, not of the world"

Humility in a priest is a virtue that precludes the vice of worldliness. I've met a few such priests, but they are very scarce.

I've met but a few also. Most notable among them would be Fr. Lombardi, who tends the Grotto of Our Lady at Emmittsburg.

Paul...didn't this guy ever do a sermon on "by your fruits you will know them"...and the fruit that came out of Vatican II was sure rotten, cause someone (you know who..) decided to open a few windows and let the world enter the Catholic Church...look what happened...this is a good cartoon!