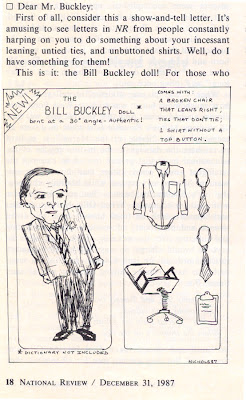 In honor of WFB's passing, I present an old cartoon from 1987. My political outlook owes much to the influence of Bill Buckley and National Review. As anyone who'd watched "Firing Line" way back in the day can attest, Buckley was always leaning over in his chair and his ties were usually loose. I knew that he received occasional ribbing from others regarding these poor habits, so I drew a cartoon and sent it to him. The top part is the beginning of my letter to him. He printed it, along with the cartoon, in December 1987.

Rest in peace, Bill.
Posted by Paul Nichols at 8:18 AM