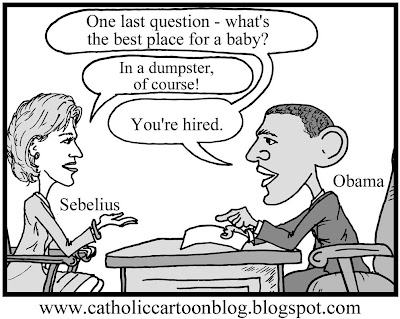 According to Life News, it appears that Obama is set to select Kansas Governor Kathleen Sebelius as the new Health & Human Services Secretary.

Don't expect a "mea culpa" from the Catholics out there who claimed that Obama wasn't so radical on the abortion issue. What his "Catholic" supporters out there neglect to mention is that it's not just Obama himself, but all those he appoints to positions of power and influence that will really ramp up the pro-death march.

Appointing an abortion lover like Sebelius (again, another bad Catholic) is like appointing Ted Kennedy as Secretary of After-Party Dinner Transportation.

Get the details at Life News:
http://www.lifenews.com/nat4845.html
Posted by Paul Nichols at 10:13 AM

Got a good chuckle out of me on this one! Thanks!