Is the Pope responsible for our thoughts on non-Faith issues?? 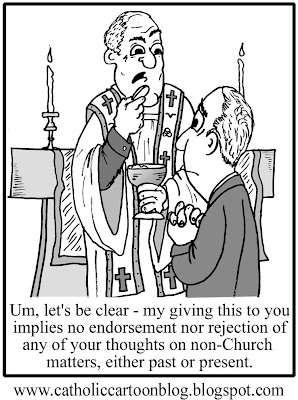 This is beginning to spiral out of control. Now, it appears that private Church matters have to be wrung through the secular wringer in order to appease the secularists. What does it matter to them? Oh, but when it involves the political or religious Left, I suppose it does.

Apparently, the Vatican is now, to shut these people up (as if it would), asking Bishop Williamson to repudiate himself. Here again, rather than telling someone to mind their own business, the Church is looking to appease some group pulling out an "offended" card. These "offended" groups will never be appeased until the Church rolls over and plays dead. Tossing them a few bones in the interest of "good will" certainly does no good. Someone needs to come up with a Catholic version of "Whatever" by Liam Lynch and play it every time "they" get "offended".

Paul,
again your acting all defensive on this issue, instead of promoting peace.
I agree with you that the media (as they do most of the time) got it all wrong.
On the other hand, it is absolutely normal that the Church clarifies its positions, in particular by asking Williamson to deny his racist ideology if he wants to be a real bishop.
The problem is, he doesn't.He hates the church and the pope, and he prefers to destroy the whole process of unification rather than accepting the Holy Father's generous offer.
Don't you see ? He's the first beneficiary of this scandal.
And as the Bible says, the guy who brings scandal to the church is in big trouble with God.

Actually, Jean, I'm poking a little fun at the idea that somehow the Church is responsible for non-Church related ideas that any number of Her Bishops or Cardinals has.

The Pope can't win for losing. It seems like there's a group of those outside the Church who just pounce on everything he does.

And sure, the Church should always be clear on things, but they're trying to satisfy a cabal that won't ever be satisfied.

But I would bet you this - IF Bishop Williamson was an extremist on the Left side, the secular media wouldn't have a thing to say about it. They'd be just fine with it. (That's the next cartoon).

I'm Indonesian catholic who also have a blog. I like made link exchange with your blog.
This is my blog url http://movanugraha.info

Do you willing to made link exchange with my blog.

I disagree with the idea that Bp. Williamson hates the Church and the Pope. I think he has been remarkably co-operative through this process.

And incase its necessary to make this point, yes I believe the holocaust happened, that at least 4 million or so died, and that it was a terrible terrible event in recent history.

Anonymous said...
This comment has been removed by a blog administrator.
November 6, 2009 at 9:16 AM