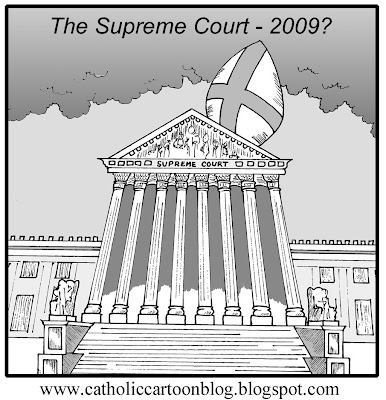 David Gibson over at Politics Daily has a good article exploring the fact that, with the opening of the new term, fully 66% of the Justices are Catholic. (For those of you who went to public schools, that's 6 out of 9).

There are plenty out there who see this as a bad thing. This crowd is made up of the usual suspects - the nominal Catholics, the fallen-away Catholics, more than a few radical protestants, and unbelievers in general. And, as can be expected, their arguments center on the Big Two - abortion and homosexuality.

While the article is even-handed, Mr. Gibson does get one thing wrong. He states that the justices decided a case involving capital punishment, and then claims that the decision clashed with Church teaching on the issue (inferring that the Church doesn't allow for capital punishment).

Roberts, Alito and Thomas are good guys as far as I can tell. To my understanding Thomas begins each day of work with the Litany of Humility. We can only hope that prayer would touch the hearts of all 6 since they do have the graces of baptism, confirmation, etc to varying degrees.

A Supreme Court majority that is enlightened by the teachings of Holy Mother Church, now that would be something to see!

I agree with you. A court influenced by the Church ain't a bad thing.

Although, if "liberal Catholicism" were to bring too much influence, that wouldn't be good. But I don't think we have to worry about that. Sotomayor is still outnumbered 4-1 at least. I'm leaving Kennedy out because he's not as reliable when it comes to original intent.


PUBLIC SCHOOL TAUGHT ME THAT

A real Catholic Supreme Court would be excellent

"inferring that the Church doesn't allow for capital punishment"

Actually, the church allows capital punishment only in cases where the criminal cannot be contained by any other mean. If a criminal is in prison where he is not a danger to society anymore, capital punishment should NOT be applied.
So, in 99,999999999999999% of cases(for those coming from american public schools, that's pretty much always), capital punishment is NOT applicable in america . Therefore, supporting american laws on death penalty and being a catholic is not a coherent position.
And that's not even mentionning the huge cost of death penalty (it's more expensive than a life sentence).

She stills leaves those decisions to individual governments.

IF it were an absolute evil, the Church would say so.

Jean-remy Duboc said...
" supporting american laws on death penalty and being a catholic is not a coherent position."

Being a Catholic and determining whether American laws enacted by American legislators do or do not impose or forgive the death penalty in given circumstances (which is the role of the judges, Catholic or otherwise), however, is a coherent position. Any perceived incoherence of Catholic judges upholding death sentences rests on a fundamental misperception of the role of the American judiciary. To be sure, a Catholic legislator must follow the Church's teaching. Faced with a proposed bill on the death penalty, she is asked a question within the ambit of the Church's teaching: should there be a death penalty? That question is answered--quite unambiguously, in my own view--by Evangelium Vitae. The federal judge, by contrast, Catholic or otherwise, is not asked should there be a death penalty, but rather, does the law require and allow the death penalty in this case? Recognizing this fundamental difference evaporates any supposed incoherence.

And, by the way, Justice Scalia said just that in First Things a few years ago.

Good point, Simon. The problem with judicial activism is that the judges think they can override the legislature.

The judge's job is to interpret the laws that are on the books, not try to override or write new ones.

Unfortunately, those who see the court composition as a problem comprise the majority that attended Catholic schools.

As one who did not have that privilege and is a church going (Extraordinary Rite), Magisterium adhering Roman Catholic, I found the dig offensive.

Not attending Catholic schools during the 70's and 80's is probably a good thing. Although mine wasn't bad in grade school, at the high school level everything got muddled.

But that interior anti-Catholicism comes primarily from the baby boom generation, who of course handed that on to their own kids.

But I think the clouds are parting these days.

I hope those clouds are parting. Praying for that everyday! Thanks for the comment and God bless!

Hey John, he actually says it's okay to kill innocent people??? I'd love to see your source for that one.