RCIA in the Age of Obama 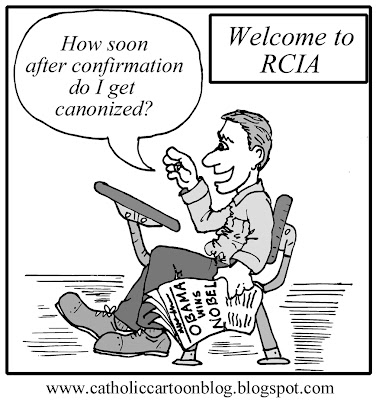 The Nobel Committee has officially sold their own prestige down the river with their preemptive awarding of the Peace prize to President Obama. Sheesh, if they wanted to honor an America-hating Peacenik, there are plenty of them who've done more than Obama, like maybe Tom Hayden, or Cindy Sheehan, or Jane Fonda.

Maybe the Committee is just trying to jump to the front of the line in the Obama Praise Department. Or, maybe they've just been watching too much MSNBC.
Posted by Paul Nichols at 10:33 AM

Oh yes, it's been a joke for a while, but now it's a JOKE with big ol' capital letters...

Everyone knows you get Canonized the day after RCIA...but then you sin and get taken out, LOL!

Well, in today's RCIA, everyone automatically gets to heaven, right?

I was waiting for an Obama Nobel Peace Prize cartoon. You didn't disappoint. Absolutely love your blog!

When I heard about Obama getting the Nobel prize - I could not believe it. How ridiculous!

So - how can this pro-abortion president get this prize?

Better get alot of those Tums, Brian. We'll need more and more over the next 3 years...

Dear Mr. Nichols:
With the news of personal ordinariates and an apostolic constitution, traditional anglicans are poised to return home to the true Church. I am wondering if you will have a cartoon on the issue, like Henry VIII or someone swimming the Tiber back to Rome. I plan to right an article on this for the November issue of my high school newspaper, and a cartoon would be great. Please contact:

I've been mulling one over, but with Christmas Card season in full swing, I don't know that I can get one done. If I do, I'll be sure to let you know.

OK, funny cartoon, but I have to tell you that the RCIA I went through five years ago was nothing like that. Where did RCIA get such a bad reputation? And, by the way, I was most definitely NOT told that everyone gets to heaven...far from it. Maybe we in the Arlington Diocese just receive better catechesis! ;-)

I completed RCIA last year, and no one told me about this. Is it possible to have my canonization looked at again (only joking)?

Funny cartoon. Stumbled on this looking for other RCIA stuff. Who has the rights to the image? I wondered if I could use it on my site.

Hi Chad, these are all my cartoons, so you can use any you like, with attribution.