A Merry Christmas to All! 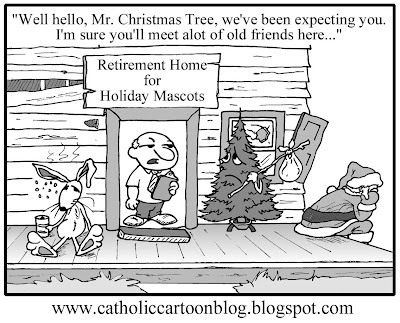 Well, another season is upon us - where the "War on Christmas" revs up as the secular humanists try to rid the public square of all things Red, Green or Christian.

I was going to add a burning American Flag to this cartoon, since it offends so many, but one day soon, it may be banned like so many other. Ol' Glory isn't quite there yet, but it's enemies are legion and growing. Heck, as holidays go, good old St. Patrick might one day be jettisoned for "Pat Day" so that feminists wouldn't be offended.
Anyway - a Merry Christmas to all who partake in the wonders of the Season - and to those of you who don't, well you just don't know what you're missing!
Posted by Paul Nichols at 4:06 PM

Merry Christmass. Mr. Nichols, I'm Brazilian, and many friends ask to me if I can to translate your charges. If you authorized me it? For publish in sherlockspipe.blogspot.com. Someones, not all.

Sure, Luiz, you can translate any you choose!

Very! Thank you so much! Seriously, its help so much the tradition in Brazil.

Very! Thank you so much! Seriously, its help so much the tradition in Brazil.