Where do you stand on Tebow? 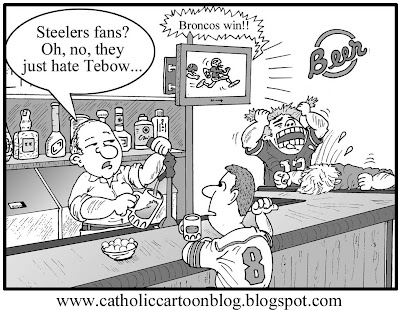 Well, the atheists and God-haters suffered another setback this past weekend when Tim Tebow and the Broncos won their football game in stunning fashion over the Pittsburgh Steelers. Add to that group the Society of Women Abusers, of whom Ben Rothlisberger is one of their poster boys.

Most of the time sports are just, well, sports. Other times, as with Tim Tebow, it's a barometer of the culture. Ask a person how they feel about Tim Tebow and it will tell you alot about where they stand on many other issues. Those who like Tebow probably are sympathetic to the Christian faith, even if they're not necessarily church-goers. Additionally, they would probably agree that Hollywood is a cesspool and embrace traditional American values. Those who hate Tebow are more likely to resent traditional American values and probably embrace the creeping socialism of the Obama administration.

Let's have a quick snapshot:

Like Tebow? Fox News is where it's at.
Hate Tebow? MSNBC is your cup of de-caf coffee!

As a father of two boys, it's refreshing to watch an athlete who loves God, is true to his convictions, isn't a womanizer/abuser (same thing), doesn't have 8 children from 4 different women, isn't out doing drugs after the game, doesn't drive drunk and kill people, and is good to his Momma.
Posted by Paul Nichols at 7:24 AM

The issues I have with little Timmy (besides the fact that I'm a Chiefs fan) - is his brand of Evangelical Christianity from is ardent Anti-Catholic.

His Family and his church are missionaries in the Philippines and are trying to convert the Catholics away from Holy Mother Church.

While I commend him for staying true to his beliefs, its just not my cup of tea

I understand what you're saying, Christopher, and I certainly get it from a Chiefs fan's standpoint.

I like the "little Timmy" - that's rich. It carries the same disdain that we Capitals fans have for Sidney Crosby (we like to call him "Cindy").

But at the very least, we don't have to hold our nose when we root for him. Hopefully he doesn't do something dumb to let everyone down, because the atheists will have a field day with it, as they do whenever a believer stumbles.

I just like him because he showed up that piece of garbage Maher this Sunday. I can't imagine the Broncs beat the Pats, but it'd be funny as he..um..ck if they did.

It's nice to see Faith exhibited and not hidden. Until I saw Santorum did it in Iowa I seriously did not think Catholics are to do such, none of the Catholics I know off the internet live like Christians one can tell no difference between them and secular society

I'm sure the Broncos-Pats game will draw a huge rating, as the Broncos-Steelers did last week. Probably bigger this time.

As for Santorum, I'm glad he doesn't apologize for his faith, like so many people do these days.

The sad thing is that, as bad as popular culture is right now, it will only continue to devolve. I often explain to my own kids that things happening today were completely laughable just 20 years ago. Just think of what the next 20 holds.

Christopher,
EVERYTIME a DAMN DEMONRAT tries to dissuade me from voting for a non-Catholic pro-life politician, they bring up a similar argument,i.e. "he HATES Catholics!", regardless how anti-Catholic the DEMONRAT acts.

Thank God he was not aborted as the doctors had recommended.

The Presidential elections are close. Will you help promote the campaign to "pray a rosary a day for life" for an end to abortion in the whole world.