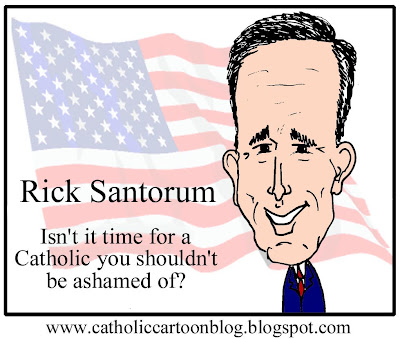 While it may put my millions and millions of government grants at risk, the Catholic Cartoon Blog hereby endorses Rick Santorum for President.

We need to restore decency and Americanism to the White House. Romney? He might be a decent man, but he's a liberal wolf in conservative sheep clothing. I have no confidence in what his potential Supreme Court picks would be. Gingrich? He's a classless individual and serial philanderer. His unlikability factor is up there with Hillary Clinton. Ron Paul? He needs to be the Federal Reserve Chairman. As many have stated, though, it doesn't matter whom the Republicans nominate - Obama has got to go.
Posted by Paul Nichols at 3:23 PM

+1 from Germany for Santorum

Sadly I cannot share your enthusiasm for this basically decent man, if for no other reason than it is my very definite opinion that barring a miracle nothing can stave off America's appointment with oblivion. I concede that Mr Santorum has some fine qualities, but he has some serious problems that prevent me from working up any enthusiasm for him.

Many of you know how he betrayed a genuinely pro-life politician, Toomey, and endorsed the rabidly pro-abortion Arlan Specter, who went on to defeat Toomey. The whole troubling story of Mr Santorum's terrible lack of judgment can be found at the Culture Wars website. I would urge everyone who is supporting Mr Santorum to read this carefully and calmly. (Mr Santorum's reason for supporting the despicable Specter was supposedly Specter's assurance that he would support a prolife Supreme Court justice if Santorum backed him rings a bit hollow. Wouldn't the prolife Toomey have supported a good Supreme Court choice?)

But the most serious objection to Mr Santorum, which is the same objection one would have toward Gingrich, Perry, Bachman, et al, is that he is completely under the influence of the Israeli lobby and is, therefore, a rabid promoter of another totally unCatholic and unjust war against the innocent, this time in Iran. The warmongering of the Republican candidates (who on this point are in lockstep with the Democrats) is genuinely frightening and if allowed to have sway will be a catastrophe for America morally, spiritually and financially. Mr Santorum's views on this issue border on madness and yet he is no different than most other candidates on the matter. It is tragic.

As usual, we will have no choice whatever in November because neither Obama nor the Republican will be serious about fixing the problems that plague our land. It will be the usual meaningless "puppet show" as the great Hilaire Belloc once described elections.

In the past we have been presented with many Republican people who conservatives got all excited about because they were going to do this, or do that. But they never did. Whether it was Gingrich's laughable "Contract with America" or Mr Reagan's presidency, the Republicans can always be counted on to stab the conservatives in the back once in office. Once bitten, twice shy. In our case, we have been bitten innumerable times.

The above comment was either written by Ron Paul or for Ron Paul.
As for me, I don't care who gets the nomination - I would be just as happy with Gingrich as Santorum - as long as it is one of the two. I hope one of them wins the nomination, and chooses the other as his running mate. Ron Paul is "out there." Way, way "out there."

I share some of the pessimism of Aged Parent, though. I was spitting nails when Santorum supported Specter. That was a deal with the devil. I also share concerns about the militarism that Ron Paul speaks of. I have a 15 year old son who watches the Military Channel for fun and I think that places like Iraq, Afghanistan & Iran are NOT worth his blood or the blood of ANY American.

I concur that America's date with oblivion is probably still on schedule no matter who gets elected. Any country who tosses God aside, kills it's babies, and lets women fight it's wars isn't worthy of asking Him to "bless America".

No, Santorum won't fix everything; he probably won't even fix most things. But considering that the current President's modus operandi is that it's "Payback Time", Santorum will represent a big "reset" at the White House. At a minimum, we know that a President Santorum isn't looking to "get back" at Christian America.

The question for me will be does a President Santorum return the Winston Churchill bust to the Oval Office and let our old friends know that we're "back"?

Sadly you have decided Newt's reconciliation with Christ, although encouraged and welcomed in the eyes of our Lord Jesus, causes you shame for the man.

We should learn from God that there is nothing to be ashamed of in a man who has sought the redeeming mercy of our Lord.

If Rick and Newt both seek forgiveness and mercy in confession, what difference is there between them?

Railrider, I've never said that Newt's conversion causes shame in any way. I'm not even speaking of his conversion.

I'm just giving my opinion that Rick is a better man than Newt is.

Thanks Paul. I am on your side.


That was with no coaching from her mother. She's got her own opinions.


BTW Joe, as soon as you're eligible I'm donating to your campaign. I'll even pass out flyers.


Aged Parent, if people turn back towards God we have a chance. I think people will. Maybe not all but some will.

I guess I should have proof-read that cartoon better. Should have said "Isn't IT time...".

Sister Myra would have my head!

Unfortunately, I don't believe a Catholic can be elected to the Presidency. There's just too much Anti-Catholicism embedded in American Society (Sadly most is by "American Catholics". Mores the pity.)

Santorum will be (is being) savaged by the lamestream media who's agenda is to push abortion and homosexuality at every turn.

Right now, if it's still a race by the time my state's primary rolls around, I'll be voting for Rick.

Mitt & to a lesser extent, Newt, are TOO Country Club Republican (DEMONRAT-LITE). I like Dr. Paul, just have a hard time with the Stoners who seem to support him.

unfortunately Sanatorum has no chance of winning, wishful thinking may hope so but it is a long, long shot. Obviously Newt is a contender as the polls show in SC and the national polls.

newt as Speaker was 3rd in line for the presidency, no matter how Rick spins it, Newt was a true leader. Not only has Newt reconciled with God, he also had the courage to say he finds peace in the Eucharist on national TV.

Find courage in your vote, but as I look at it, a vote for Rick S. is a vote for Romney. Romney Vs. Newt, no contest on "Right to Life".

This is a Lutheran for Santorum, it is about time that the American people get a candidate that is clearly Pro-Life.

I haven't decided. There's still the whole "enhanced interrogation" thing. I know what ISN'T going to help me decide and that's the whole "a vote for this guy is really a vote for that guy." nonsense.

As long as there's a vote AGAINST Obama, we'll be better than we are now.

A Catholic candidate? I think not. There's more to being a Catholic than opposing abortion. Santorum is a war-mongering maniac, who would go to war with half the earth for the sake of Israel. He is a big government socialist if there ever was one, who never met a spending bill he didn't like. The most genuinely Catholic candidate in the race is Ron Paul, and he's a Baptist. He wants us to practice the Golden Rule in foreign policy and actually have the government abide by the law: i.e. the Constitution.